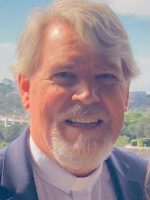 Rev. Dr. Thomas Johnson is serving his fourth Interim pastor position since he retired in 2018. He served as the Director of the Center for Lutheran Studies at Claremont School of Theology and as a Professor from 1996-2021. Pastor Thom just celebrated 39 years as an ordained pastor in the ELCA. He served Prince of Peace Lutheran in Covina for 23 years and has published a number of books. His book titled “Celebrating the Seasons of Baptismal Living” was required reading in most seminaries. Two courses he taught for 15 years were “The Role of Being Prophetic and Pastoral: An Introduction to Dietrich Bonhoeffer” and “The Reformation and Emergent Movements: A Comparative Study.”

He is coordinator of the Inland Valley Interfaith Group and serves on the Christian-Muslim Consultant Group of Southern California. He lived in Egypt for a year and a half and loves to travel with his wife Julie. He has organized numerous spiritual pilgrimages over the last 30 years and is planning a new one in January 2024.

He has four adult children, ages 28-40, two cats, and has lived in Claremont, CA for the past 30 years. He is originally from Minnesota and graduated from the University of Minnesota.